How to Close the Gender Pay Gap in U.S. Medicine

Despite increased attention to gender disparities in the workplace, indefensible differences in salary between women and men persist in medicine. One national study of academic physicians in 24 public medical schools found that female physicians make about 10% less than their male counterparts at all academic ranks, even after adjusting for specialty, hours worked, and other variables. Medscape’s 2019 Physician Compensation Report finds even greater disparities, with full-time male primary care and specialist doctors earning 25% and 33% more, respectively, than their female counterparts. 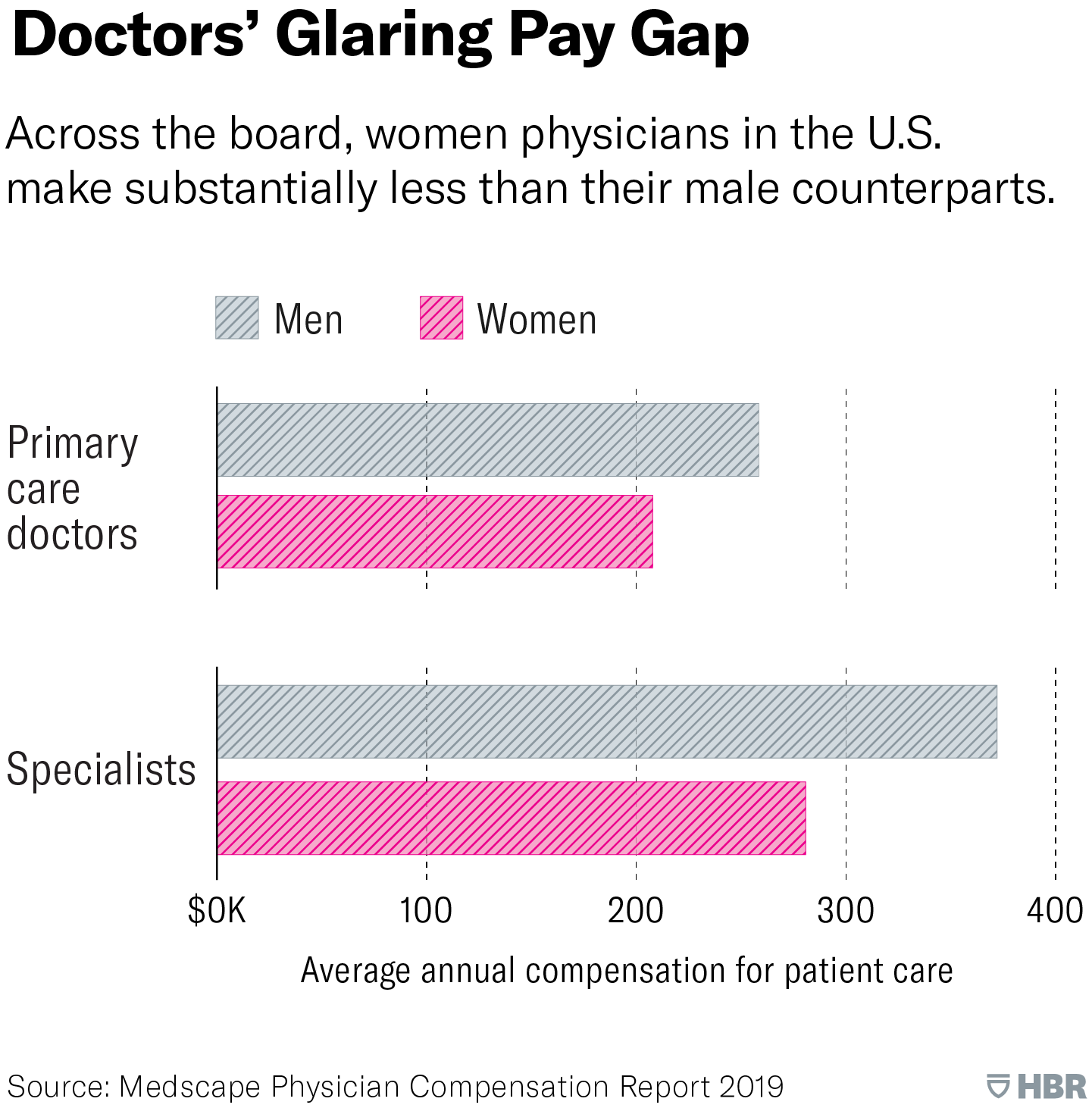 These differences are especially notable – and disappointing – given that female physicians actually outperform male physicians in some areas; one study of 1.5 million Medicare hospitalizations found that female doctors’ patients had significantly lower mortality and fewer rehospitalizations. It’s hard to imagine by what calculus a health care organization would pay women less than men for their better outcomes.

The solutions for closing this gap are complex, but achievable. Drawing on existing research, lessons from other fields, and our own experience as researchers and leaders committed to gender equity, we believe that organizations should pursue three approaches to address the problem.

Lack of accurate salary data creates a major barrier both to leaders seeking to address inequities and to female physicians as they negotiate. Pay audits and increased transparency could help. Organizations outside of medicine have effectively used audits to reveal pay discrepancies and enhance pay equity. For example, after a 2015 analysis of more than 17,000 salaries at Salesforce, the company found that 6% of the employees (about equally split between men and women) required a salary adjustment, including, CEO Marc Benioff told CNN, “quite a few women” who were paid less than men.

To create the most useful audits in healthcare it will be essential to assure that they capture total compensation. Many physicians, particularly those practicing in academic settings, receive compensation from both clinical and non-clinical activities. Evidencefrom outside of medicine suggests that women are more likely to volunteer or be volunteered for non-promotable work, and, within medicine, women perceive that they are more likely to be given uncompensated work (such as unpaid committee or teaching positions and office-improvement projects) alongside clinical care. Comparing compensation for clinical activities alone would not capture these differences which contribute to lower overall salaries for amount worked.

In addition, auditing should take into consideration the demands that female physicians’ patients make relative to those made of male physicians. There is evidence that female physicians have more female patients, and more patients with psychosocial complexity, than their male counterparts do. Patients in both groups often require longer visits and more management time outside the office. Further, research shows that patients tend to seek a different (and more time-consuming) kind of care from female doctors, often talking and disclosing more and expecting more empathic listening. Accurate auditing will need to account for patient complexity in addition to number of patients seen or the number of patients a physician has on their panel to accurately assess clinical load.

Providing salary transparency is a more controversial approach to promoting equal pay that has been explored in other industries. Public universities such as the University of California system have made compensation data publicly available for many years. In Canada, public disclosure of faculty salaries above a certain threshold reduced the gender pay gap. Some private entities have joined the trend as well. At the software startup Buffer, publicly publishing pay data did not eliminate gender-based salary discrepancies. However, it did push the company to identify and address potential sources of inequity, such as subjectivity in assessing experience and readiness for promotion. While there isn’t a case of a health system that has published salary data and demonstrated the subsequent effects, experiences from other industries suggest this approach is worth discussing. We acknowledge that there are certainly many potential negative effects of pay transparency on organizational dynamics, and any transparency initiative should be rolled out with caution. A medical institution considering transparency would need to ensure careful auditing of data ahead of publication, and to have well thought out plans for addressing potential conflicts among staff, as well as between staff and management, that might emerge.

Data from the Harvard Kennedy School shows that women negotiate for lower compensation than men do in the absence of clear industry standards but negotiate for equal salaries when standard salary information was available, suggesting the value of creating environments in which information about compensation is shared across gender lines.

CDC is worried Americans aren't following its advice as the number of U.S. coronavirus cas...

Trump expected to keep Esper on